The end of the year is very near and so is the end of Wintersday. The Christmas time is often very busy and stressful for a lot of people, even though everyone are encouraged to relax with their family. Deadlines need to be met and Christmas preparations made. Wintersday started already on the 14th of December, but back then I had no time to get to know the event or make a post about it. Now, even though there's only a few more days of Wintersday left, I felt that it'd still be good to cover the Wintersday event in this blog, and decided to sit down for few hours to write down this comprehensive summary of the event from the crafting and trading point of view.

Wintersday has quite a long tradition in Tyria. It existed already in the original Guild Wars and – along side with Halloween – was the most anticipated event of each year. The capital cities (Ascalon City, Lion's Arch, Droknar's Forge and later Kamadan) would get decorated to match the holiday season. Holiday themed quests were available, enemies dropped Candy Cane Shards which could be exchanged for gifts, and snowball fights attracted PvE and PvP players alike, because no one wanted to a miss a chance to throw some yellow snow at their fellow players. People would get together especially in Lion's Arch to view the decorations, receive hats from Grenth and Dwayna, exchange presents, dance and just hang out with each other.

The Wintersday in Guild Wars 2 has many of the same elements. The beautiful decorations at the center of Lion' Arch instantly get one in a Christmas mood. One can encounter Christmas themed enemies that drop presents while adventuring out of town. There are three holiday specific currencies one can collect and exchange for presents and other items. Snowball fights are still around and people continue to be enthusiastic about taking part in them. There's three new activities as well: one can participate in Bell Choir which is somewhat similar to Guitar Hero, have fun at the Winter Wonderland jump puzzle, do the Tixx's Infinirarium dungeon in order to obtain toys (mini-pets), and protect cute dolyaks in the Toypocalypse, which is a tower defense type of mini-game.

There are a lot of Wintersday specific items available during the event, and one might be a bit confused at first about the different ways of using and obtaining them. Most of the items can be bought from The Festive Lionguard [Gift Exchange] in Lion's Arch. The items are bought for three different event specific currencies: Ugly Wool Sweaters, Ugly Wool Hats and Ugly Wool Socks. The currencies can also be sold and bought in the Trading Post. It should be noted that each currency has a different value to the vendor.

There are also other ways of getting exactly the items that are sold by the vendor, including buying the items from other players via the Trading Post. In this case one should compare whether it is cheaper to buy the item directly from the Trading Post, or buy enough of the event specific currency and then get the item from the vendor (if you look carefully, you might even find something worth flipping right now!). The other ways of obtaining the items are getting them as drops from Wintersday Gifts, by killing Wintersday themed enemies, or by completing Wintersday activities (Toypocalypse, Snowball Mayhem, Bell Choir, Winter Wonderland). 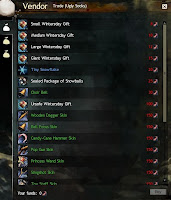 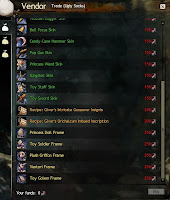 The Festive Lionguard vendor has three tabs; each contains the same items, but accepts a different currency.

The Festive Lionguard first of all can exchange the ugly pieces of clothing for Wintersday Gifts. There are Small, Medium, Large and Giant Wintersday Gifts, which prices increase in correlation with the size of the gift. There's also two other packages for sale: Sealed Package of Snowballs and Unsafe Wintersday Gift. And in addition to the gifts sold by the vendor, there's one more gift that is obtained by completing Wintersday activities: Personalized Wintersday Gift. All in all, plenty of presents for everyone.

As for the Wintersday themed recipes, the vendor sells two of them: an insignia recipe for tailors, leatherworkers and armorsmiths, and a sigil recipe for weaponsmiths, huntsmen and artificers. These and also other recipes for these disciplines that are not available from the vendor, but can be got from the Wintersday Gifts.

In addition to the recipe sheets, there's a lot of new recipes for all disciplines that can be learned through discovery! For discovering the recipes, one needs different kinds of snowflakes. One type of snowflake – the Tiny Snowflake – is sold by the vendor, while others (Adorned, Delicate, Flawless, Gilded, Glittering, Intricate, Ornate, Pristine and Unique) are got as drops from gifts. I do not wish to spoil the fun of discovering the recipes, but in case one needs assistance with spotting the last missing ones, there's a comprehensive list just one click away.

The toy frames are exactly the same one gets after completing the Toypocalypse dungeon. You can use them for crafting Wintersday mini-pets in the Mystic Forge. The frames are quite expensive from the vendor so it's recommend to rather complete the dungeon paths – they are soloable and don't take too much time. Besides, you also need other materials for crafting the minipets which can be easily obtained as dungeon rewards: 250 Drops of Magic Glue, 250 Wads of Enchanted Stuffing, 250 Mystical Cogs and the frame which defines the toy.

You can buy the stuffing and the glue, but the cogwheels are account bound and need to be obtained from the dungeon. One can get enough cogwheels for only three out of five different mini-pets by completing all five paths, so plan carefully which three mini-pets you are going to craft – unless you are going to buy the remaining two from the Gem Store anyway. One also needs to buy 250 drops of glue or wads of stuffing for the last mini-pet from the Trading Post. You can also get the stuffing and glue from the different types of gifts, which can make them profitable to open.

As always, there are some items up for sale at the Gem Store. There are weapon skins that are not available from the vendor as well as Wintersday themed outfits. All of the crafted mini-pets (and four others through Wintersday Mystery Boxes) are also available there, so miniature collectors can collect all five miniatures by buying the last two with gems.

During the Wintersday of original Guild Wars, players would get two different kinds of hats each year. Unfortunately such free hats are not available this time, but the Wintersday earmuffs are relatively inexpensive (25 gems) in case one is desperate for some new head-wear.

Compared to the Halloween event, there hasn't really been a lot speculation about whether it is wise to stockpile items. Either the logic behind the decisions is considered old news after the Halloween event, people have been too busy with other things to think too much about it, they don't believe it will be worth it, or they are still sitting on so much candy corn that they can't afford to fill any more bank space with event specific items, even though the collectibles tab was updated to include special event materials.

If one wishes to stockpile something, the Wintersday skins can become very sought after in the future. The recipes might also be something to take a look at. However, the snowflakes are probably the most attractive to stockpile: they have their own slots in the collectibles tab, which makes them easy to store, and there are useful recipes that need them and the products are already selling for profit! Thinking about the next summer, who wouldn't want to have some ice cream in the middle of a hot day?

And that's that about Wintersday from the trading and crafting point of view. I hope you enjoyed reading this post regardless of it being quite late, have had a great and relaxing holiday, and will continue to have fun for the last few days of the Wintersday event!
Posted by Kitten at 11:31 PM

Other Notable Blogs and Sites